Contessa gets a call that Harry is dead, but this call was a trap to get all the Protectors.  They are kidnapped and blackmailed under the threat of a timed bomb to “help” a big wig shipping magnate. Harry and Contessa are to drive to Kofax’s estate where he proposes that Harry and Contessa help deliver some jewels to him and stave off any efforts to steal them all while Paul is under threat by the ticking bomb. The jewels are stolen because of a setup triple cross and the Protectors are going to have to find out why. 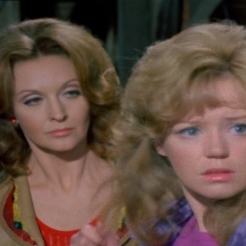 The creepy John Neville kidnaps The Protectors in this explosive episode. The storyline was meant to send you in every direction to ultimately confuse you into believe nothing. Peter Bowles is back in another episode which does help but the story is not that concise but original.