Mannering receives a telegraph about a ring being delivered to him in London, but the deliveryman’s vehicle is found burned and him inside dead. The inquest finds his death to be accidental but Mannering believes different. Mannering notices a ring on a strangers finger which was stolen off the dead man confirming the belief that the death was not accidental. The murderers must be hiding away in one of the many rented manors in the area but there is very little evidence to help that belief. It is a search through the highlands that find Mannering in a lot of trouble and a very disturbing mind. 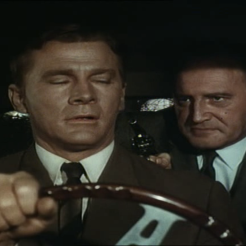 A nice episode based in the British Isles but not in London. The location does provide a change to the standard scenery in most episodes. The role of Dino Rossi, played by Paul Maxwell is well acted and sort of reminds me of Mussolini. I did love this story but fell more in love with the actual location.